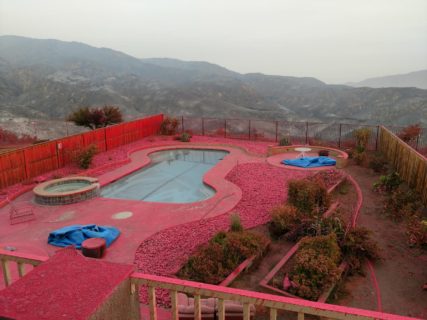 Lake Elsinore, California, resident Ed Testa had to flee from his home during the August, 2018, Holy Fire in the Santa Ana mountains. His home was spared from fire damage but it was covered in Phos-Chek  — the fire retardant dropped from tanker planes.

Everything was a bright pink, including his 24,000 gallon swimming pool, which fortunately the family covered before evacuating. They started the cleanup next to the pool and worked outwards, trying to keep as much of the retardant out of the water as they could, but to no avail.

“After two gallons of phosphate remover we were still getting numbers off the charts, over 3,000 parts per million,” Testa says. “[I] finally decided it was best just to drain it and start over than keep adding chemicals. Once we finished with everything I put all new filters in because they were pink as well.”

Testa’s wife works at PEP [Pool & Electrical Products] a regional wholesale distributor, where they were able to get all of the products they tried to treat the water. His neighbor, who owns Laguna Pacific Pool Pool Service, also helped him with the cleanup.